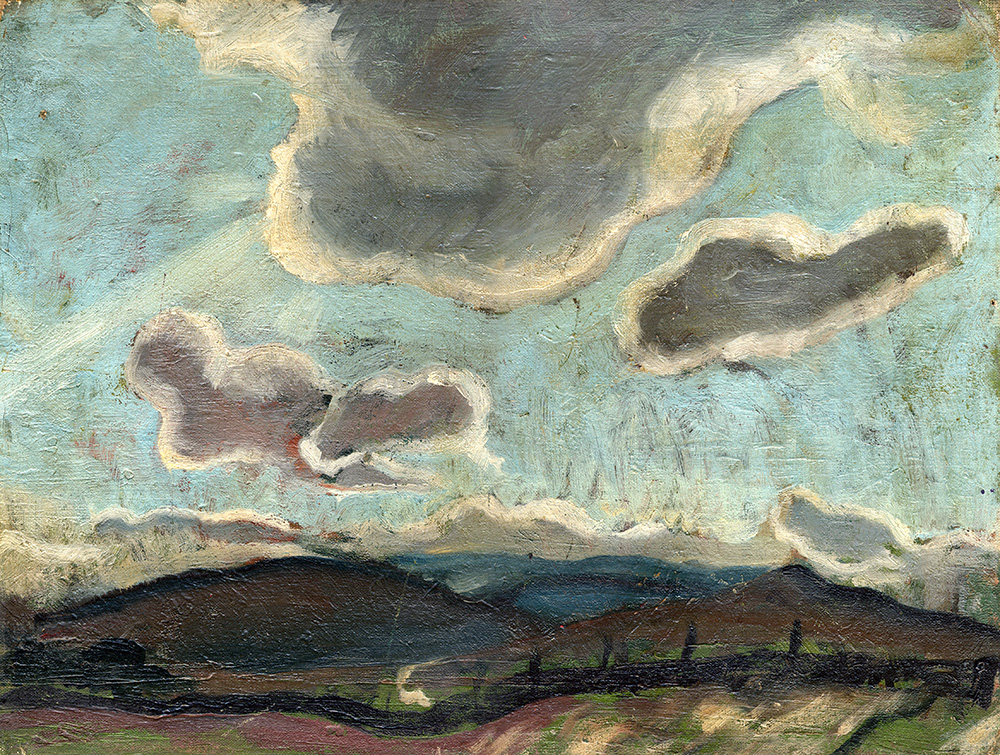 Clouds Over the Derbyshire Moors

This is the earliest surviving oil landscape painting by Jean Royle made probably when she was a student at Sheffield Art College. It depicts the landscape of the Derbyshire moors where she lived at that time.   For the sky, which occupies at least three quarters of the canvas, she uses cerulean mixed with varying degrees of white, and this is infused with other colours, showing in the textural brushstrokes.  Some of this effect may have been the result of some darker underpainting.  It is a very expressionistic painting.  The dark clouds, with their pale borders, dominate the sky like hurrying, limbless creatures moving to the left, where shafts of light shoot out from the huge uppermost cloud.  An austere tract of moorland is depicted in heavy blues and browns with a strong, dark strip of road, edged with stark fence posts, crossing it in undulations showing the contours of the land.  The foreground is relieved by reddish–purple heather with some green freely brushed into it, and some light cream strokes added to show reflected light from the sky.

This is certainly a painting by a youthful person who revelled in the landscape, not only as an artist but as a committed hill walker. This area of the Derbyshire moors would have been known to the artist from her childhood when she lived in the Mayfield Valley near Sheffield. In childhood she would accompany her father, Stanley Royle, on many of his painting excursions and as an adult thought nothing of a 20 mile hike across the moors.